The Crack in the Cosmic Egg

(Quote from the late Ray Palmer, publishing giant and creator of the Richard S. Shaver Mystery and AMAZING STORIES, from the book by Fred Nadis, THE MAN FROM MARS, PALMER’S AMAZING PULP JOURNEY, Penguin Books, 2013)

THE HIDDEN WORLD OF OWLS AND UFOs

Permission given to quote small passages by reviewers and journalists.

This article originally appears in the March 24, 2018 issue of Watcherstalk.com and is produced here with permission.

Another version of this article can be seen at Owls and Hidden Reality! – https://wordpresscom507.wordpress.com/2020/06/07/

Nature has multiple strange “Quirks” to throw at us, one as strange as synchronistic behavior of “Owls” as seen through the eyes of paranormal researcher Mike Clelland who shows how the puzzling aspects of owls connects them to UFOs and Jung’s meaningful synchronicity forcing us to see vistas and expanded realizations of our existence.

“I can’t help but think that the owl is playing the role of an alarm clock, trying to wake up the experiencer.  Something is happening and it is implied that there is a lot more to reality than what we have been taught…I am now at these points where I feel that something far more bizarre and far more complex is going on that simply metal spaceships filled with scientists…whatever is at play, it is real enough to see the patterns, yet elusive enough to remain a mystery.  There is a mood to these stories, a great feeling that goes far beyond just nuts and bolts collected by most UFO investigators. These are hunches that lead nowhere, except perhaps within.”

Clelland journeys through multiple incidents where the appearance, antics, and bizarre communications of “owls” have him questioning the exact status of reality, especially as they appear to have a genuine connection with UFO phenomena and apparitions ( generally known as “flying saucers”)  in tales where “the very fabric of reality comes into question.”

These are very strong proclamations.

Based on his own experiences, Clelland has come to appraise the appearances of “owls,” or what certainly appears as owls, to be “psychic projection,” as well as physical owls, as part of “carefully orchestrated phenomenon”—which seems to operate in tune with Earth’s magnetism—in some “Psychogenic,” unknowable instinct to UFOs, otherwise known as “the Oz Factor”  (pp. 32, 33, 56).

Clelland appraises owls as archetypal “winged mystics,” told in multiple tales throughout the book that indicate that  their appearance, possibly, as some kind of psychic projection, but still a physical and paradoxical phenomena: they always appear at a “perfect moment,” sometimes in conjunction with UFO experiences, projections or direct contact, indicating a classical “crack in the cosmic egg.”

Often, says Clellamd, these occurrences happen along what if known as “lay lines” in some type of crazy synchronism, some type of   “altered reality” in a “swirling mass”—“a boiling soup” – in “something complex.”  Here is the power, says Clelland, to alter reality, change people, in ways we don’t understand, laid out often in metaphor, but still telling us of an “underlying pattern” where a “fine line” exists between “inner and outer worlds” affecting our lives.

It emanates as messages from the subconscious “thought forms” able to appear as having aspects of “technology.”

Clelland tells the story of a lady and her boyfriend who confronted what they felt was “something like dressed as ghosts” standing in the light of their auto headlights. Suddenly, the boyfriend blurted out: “Those are owls!”

Witnesses began to demonstrate psychic powers of their own after encountering four-foot-tall-objects, kind of floating, which left them with a deep sense of “spirituality.”  This was the same area where witnesses saw a football-field-sized UFO glide over in the Hudson Valley flap in the 1980s.

Christopher Bledsoe, Sr., and his son experiences a typical owl-UFO incident on January 8, 2007 involving “missing time” when they encountered a “small glowing humanoid” near Cape Fear River in North Carolina. Later, an entire crew saw multiple UFOs at close range.  Chris became withdrawn until he had a 2013 “owl” incident in brush right outside of his window where he saw two owls living in hickory brush making their usual loud hooting sounds.  He said he had never saw owls in the area before.

The owls could also be seen starring from a 131-foot tower near home, and on June 25, 2011, lightning struck his CB antenna, his CB equipment, and a destroyed a lot of his documentation.  He felt the owls came into his area as a kind of warning.

Owls make frequent appearances at critical and surprising times in the lives of people. A seven-year-old boy saw a huge owl on a tree branch with a ‘stare’ that “seared into his soul” at a spot were an UFO abduction case had taken place 2007.  When the boy’s father died, a white owl made an appearance. Chris Holly declared that that he would see owls at various times, usually white owls, as if an “harbinger for an impending dark contact experience,” contacts that causes “any thinking person to contemplate life’s grand mysteries, the same questions that have followed us through the ages.”

Dr. Kirby Surprise, in his book SYNCRONICITY, speculates that the owl/UFO phenomena plays out in some kind of “pattern” seeming to be created by the participants themselves in some way. “Consciousness of the experimenter can directly and measurably influences the result of their experiment…owls are a metaphor of underlying pattern. There is a fine line between the inner and external world.  The owls and the UFO resonate to us because they are us!”

In some way, says Clelland, the owl/UFO phenomena is like a Rorschach Ink Blot Test in which witnesses are “telling a different story” that “something real is happening,” as if a poet is speaking through “poetry, my theology, or metaphor,” in a deeply inward exploration.

Clelland’s book is a heavy catalog of UFO/owl cases with descriptions of lights, orbs, flying triangles, saucer-shaped crafts, and other peculiarities that are reported as witness stories to Clelland down through the years.   Each case has special oddities that sets it apart.

Some cases centered on particular “antics” that owls perform as owls, others were often done in conjunction with appearances of UFOs. They were almost all highlighted by certain “synchronistic” quirks.

A typical case concerning Susan Kornacki has her involved with owls speaking to her telepathically and helping her avoid an auto accident.  There were also appearances of owls at her home which plagued her and friends for years. Birthdates, childhood memories, experiences of different people with different backgrounds, blended in unusual Jungian synchronistic fashion.

Leslie Shonaugh’s experiences blend mysteriously through the years involving the experiences of her friend Susan Kornacki, as well as a Susanne Kelly—all three having UFO adventures on multiple occasions (one or two described as a “brilliant white light…cone-shaped object…million facets), and their episodes usually involving sightings of owls at some point (pp. 135 -138).

“Occurrences” are much diversified and involved all kinds of occult-practices and mystic symbolism, and, of course, “owls.”  Dr. Kirby Surprise suggests that the “observers” were actually effecting reality in some unknown way from our “collective unconscious,” even reaching into our ancient past (p. 155).

Clelland says there is no simple explanation as to how UFO or owl events happen.

“…overall UFO has such a sweeping strangeness…a big bucket of weirdness…complicated and bottomless,” says Clelland. “Owl…some sort of stand-in-for the prototypical big-eyed grey alien.”  Clelland says that Hollywood has helped continue the myth and expectations of the UFO-owl tapestry in a parasitic fashion (with) rich veins for a seventy-year-old subculture.”  Classic and sci-fi literature are likewise a “reservoir of archetypic al themes” waiting to “interface” into the human experience.

This does not allow us to overlook or reduce the eerie resemblance of owls to the “quintessential gray alien” sometimes demonstrating the “bobbing” motion, and (as in the case of Lucretia Heart), grey aliens were reported to have “morphed” into an “owl” in full daylight and also twilight.  Some “owl” sightings have leading characteristics similar to motions reported as flight characteristics of UFOs; owls, UFOs, both seeming to become “paired together…conjoined.”

The Owl Archetype in our lives and mystic happenings is a classic example, says Clelland, as was shown in the famed Mothman and John Keel adventures of 1966-1967 where an apparitional Mothman creature harassed the west Virginia town of Point Pleasant (portrayed in the book and movie THE MOTHMAN PROPHECIES).

In other paranormal cases, such “wide-eyed, winged humanoid creatures” were called Flatwoods Monster, Brighton County Monster, the “great grey owl” of the 1955 Kelly-Hopkinsville case, or the Cornwell England “man-sized flying creature” with glowing-red-eyes.

Artist Depiction of the Flatwoods Monster

Similar events were often recorded in other stories.

Sisters Vicky and June, during a camping event in April 1976, came across a similar creature, “big as a man, pointed ears and red eyes, which shot up through the evergreen trees.”  That camping area was also a place where there had been UFO sightings, once a pulsating blue-white object was reported, and at another time, a “rectangular orange-red” craft.  In 1998, near the town of nearby Mawnan Smith, a “beach-ball size and glowing orange object” was reported by witnesses parked on the shoulder of the road—the witnesses ensued two hours of missing time.  They also encountered a huge-owl-like creature having human qualities, as it used its ‘wings’ to stabilize its flight. This episode was part of general strange and unusual UFO phenomena in that area.

A birthday party on February 17, 2013 in North Carolina also had a sighting of a slow-moving triangle-shaped UFO with white lights in each corner and a red light in its center, followed by sightings of owls the next day.  Witnesses continued to sight more owls in the ensuing days. Some of those sightings involved death incidents, others, strange dreams, but all sightings caused witnesses to peer within “the deeper mystery of both owls and UFOs…shamanism…was falling into their own deeper selves…” (p. 235)

The synchronistic events are often compared to the “OZ-factor,” as if things seemed “more real than real,” the physical world just an illusion alongside another, separate “real world.” (p. 240)

A large part of Clelland’s book is a cavalcade and kaleidoscope of the various ingredients of how this “reality” plays out through strange events[1], and, of course, “owl sightings.”   The “devil is in the details,” so-to-speak.

“…blurring of owls, synchronicity, and UFOs, and it all culminates in a spiritual awakening.”  (p. 274)

“The phenomena seems fully capable of recording the minds of the witnesses, as well as peering off into the past and out into the future…preordained events along this path…lead into the next as if some outside intelligence has intervened for some unknown purpose.” (p. 330)

“Phileman – a Winged Prophet out of Carl Jung’s Dream

One “experiencer” called ‘Ben,’ who had seen a lot of owls in “highly charged moments,” summarized his experiences this way: “There are enough stories of trauma that the scales keep swaying, leaving me unable to decipher any agenda behind this mystery…confronting something complex that shares it secrets at a great risk.”  (p. 340)

Clelland’s book is rife with such characteristics.

Mike Clelland finalizes his thick exploration of “synchronistic phenomena” as something ‘epochal,’ allowing us to see reality in its entirety, but only after old concepts are disintegrated and replaced by a “new reality.”

“…out of the mist…either whispering or screaming.”  Owls will be one proof of magic. 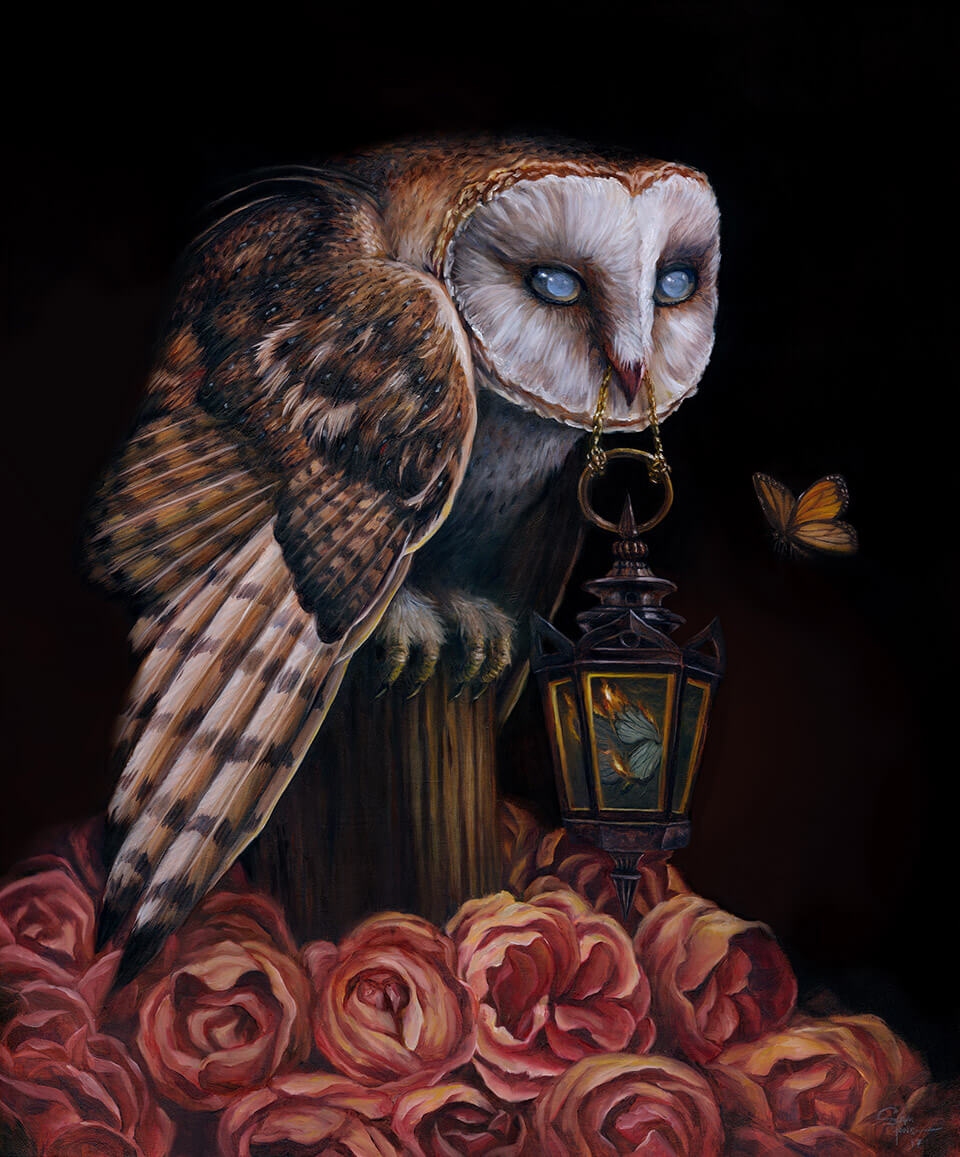 Another version of this article can be seen at Owls and Hidden Reality! – https://wordpresscom507.wordpress.com/2020/06/07/